If you'd like to help translate Anki into your native language, your help would be most appreciated!

Translations can be done through our online translation interface. To make changes, you will need an account. Please post a private message on the support site with the following information, and we can get an account created for you:

After you've contributed some translations, if you'd like to be added to Anki's About screen, please send a message and we'll gladly add you (or you can submit a PR if you know how).

Anki's translations are divided up into two parts:

Translations in the core module are divided up into multiple files, with each file focusing on a particular topic, such as scheduling, deck options, and so on, as can be seen here. 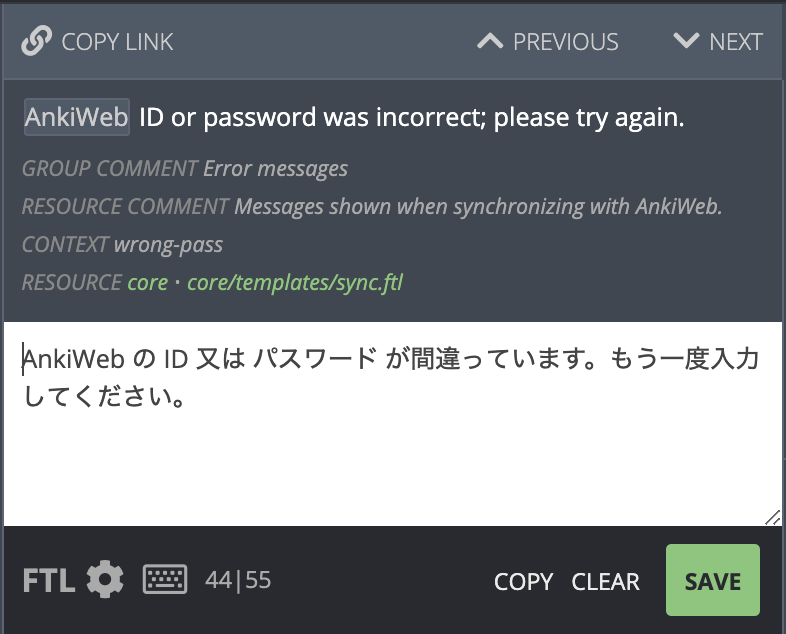 When the text is a simple string, all you need to do is write the text in your native language and click Save (or press the Enter key).

Under the English text, many strings will contain a comment to help you understand where the string is being used, or to give an example of how it appears.

"Context" is the short name for this string, and may sometimes give you a hint as to where it is used or what it is trying to represent.

Many languages change words depending on number. For example, English uses "1 cat", but "3 cats".

Some of the strings to translate will look like this: 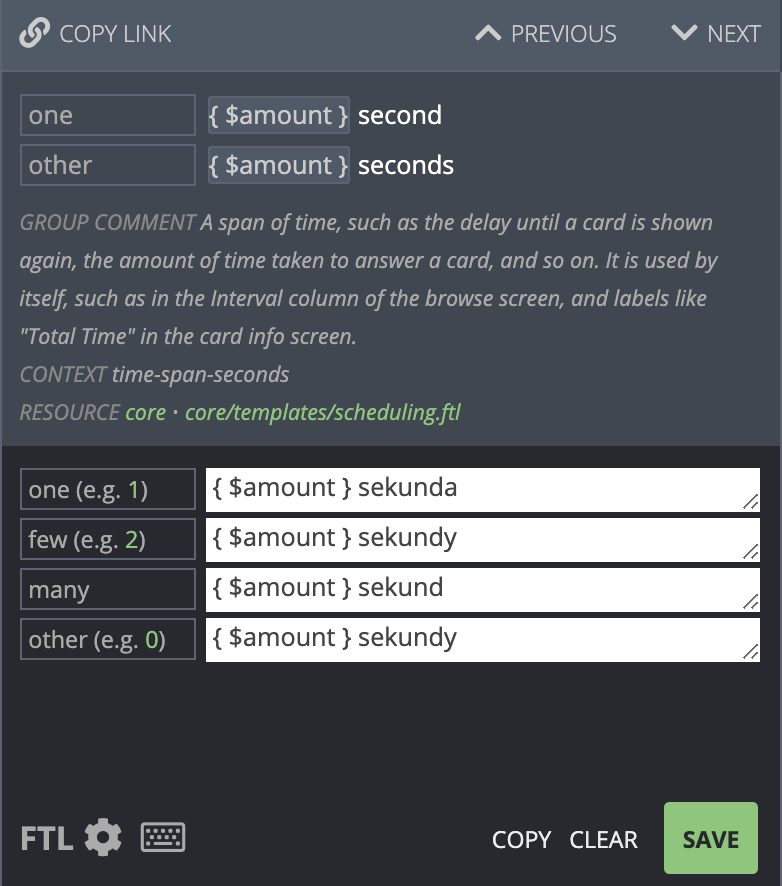 In the top part, you can see there are two forms for English - the one case (second), and the other case (seconds).

The bottom section shows the translation in Polish, which has four different plural forms. In this case, the few case and many case have been translated with the same translation.

The translation website should automatically show the appropriate number of boxes for your language. Languages like Japanese that do not have separate plural forms will only need to enter in a translation once.

The translation website supports an advanced mode for when you need more flexibility. You can access the advanced mode by clicking on the FTL icon on the bottom left. The previous example then looks like this: 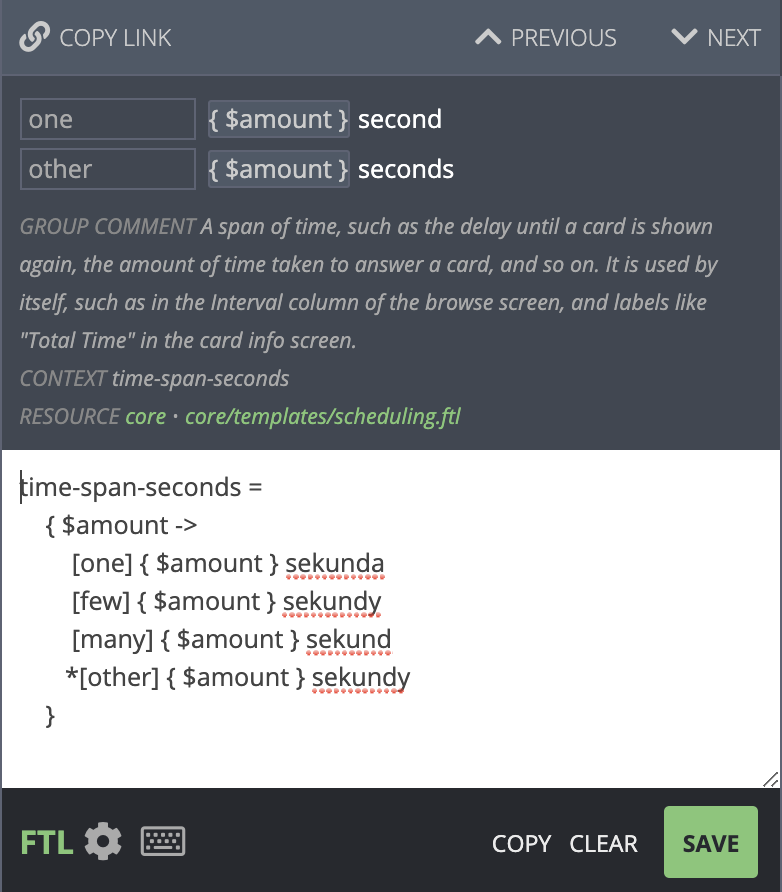 The first line is the unique identifier for this message - it can also be seen in the "CONTEXT" label near the comments.

The rest of the text means the following:

The definitions of few, many and other depend on your language.

The * character before other means that any unknown value should match other. Since in this example few is the same as other, the text could thus be shortened to:

As few is not listed here, it will be covered in the other case. It's generally best to list out all cases however, as otherwise the translation website will shown a warning that you may have forgotten to translate a case.

When writing these rules manually, please make sure to add at least one space to the start of each line except the first.

While there was little benefit from rewriting the text in this case, this flexibility becomes useful when your language doesn't fit well with the structure of the original English string.

For example, when viewing cards in the Browse screen in Anki, Anki shows new cards with a number, such as "New #1", or "New #532". The English doesn't use plurals in this case, but other languages may need to.

If you were translating this into Spanish, you'd see the following screen: 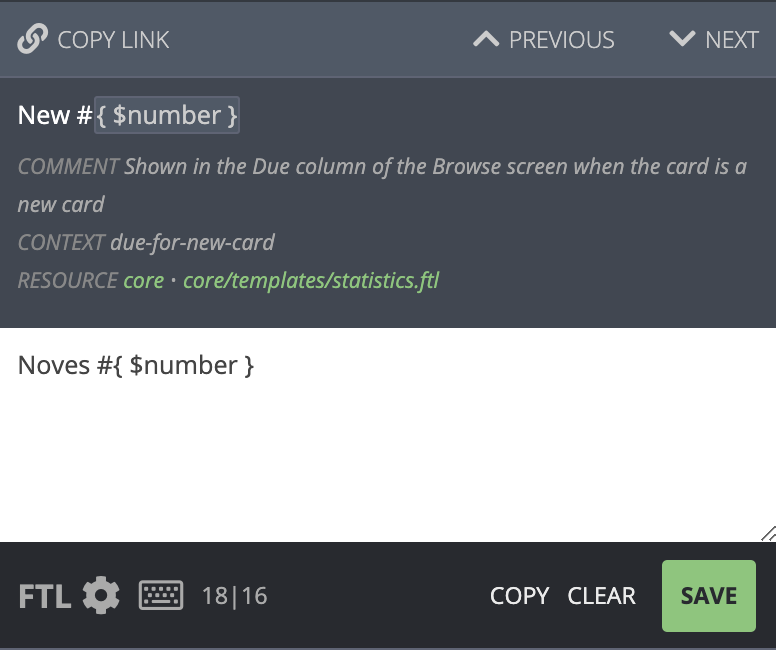 To add a plural form, click the FTL button, and then change the text to read:

Here's another example. In this case the English text is using plurals as well, but only a small part needs to change. When translating to Polish, the "used by" portion needs to change as well. So the default editing screen is not sufficient: 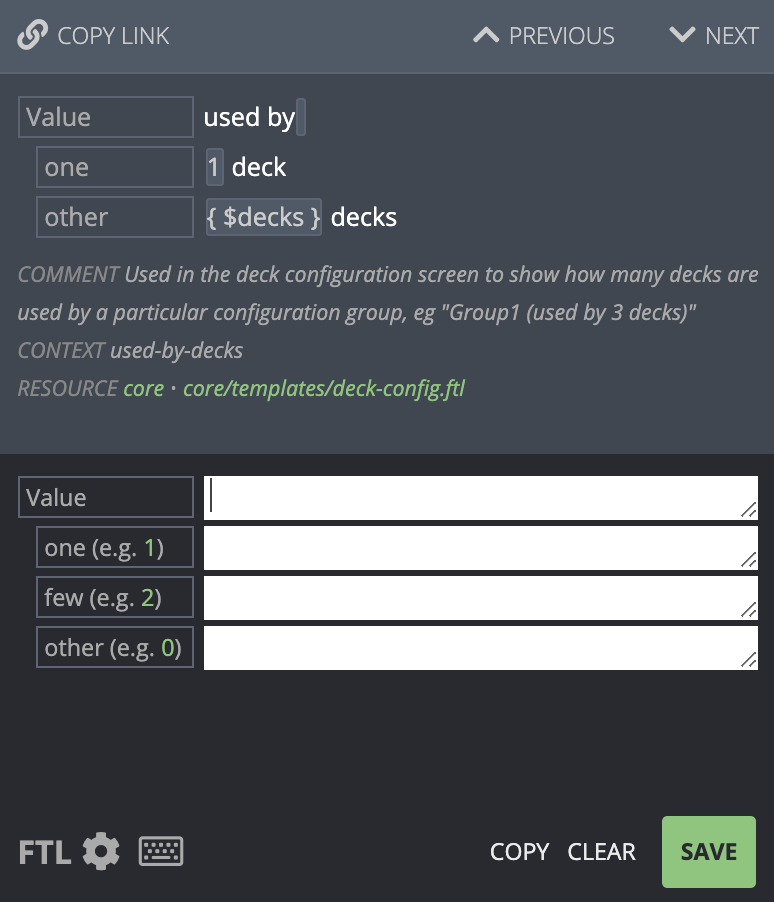 To fix this, we click on the FTL button to get a blank template: 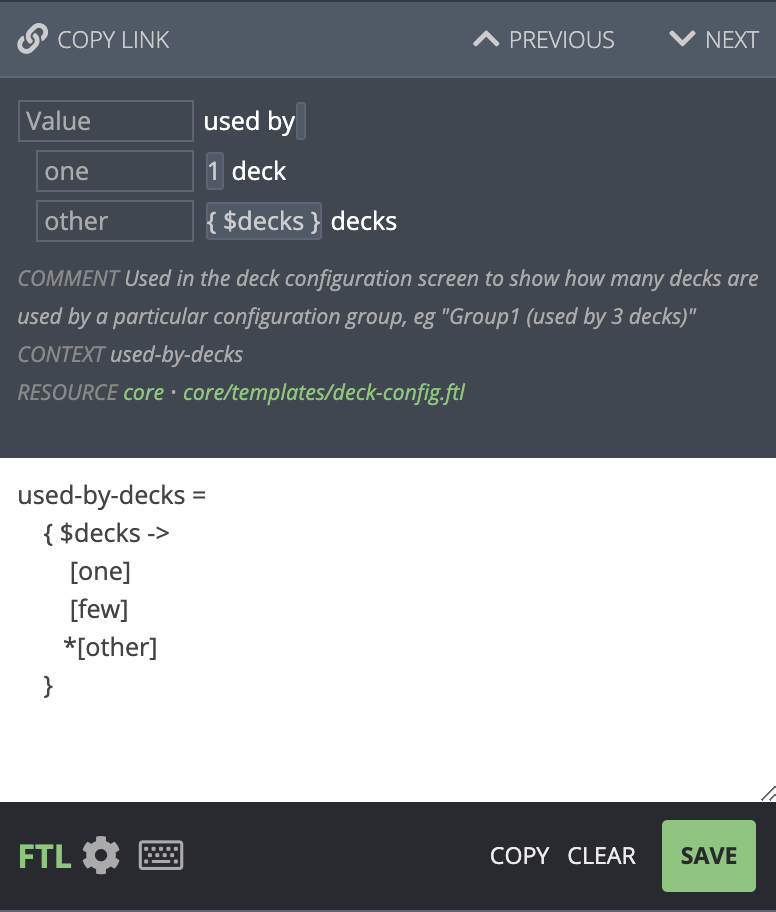 And then modify the template as required: 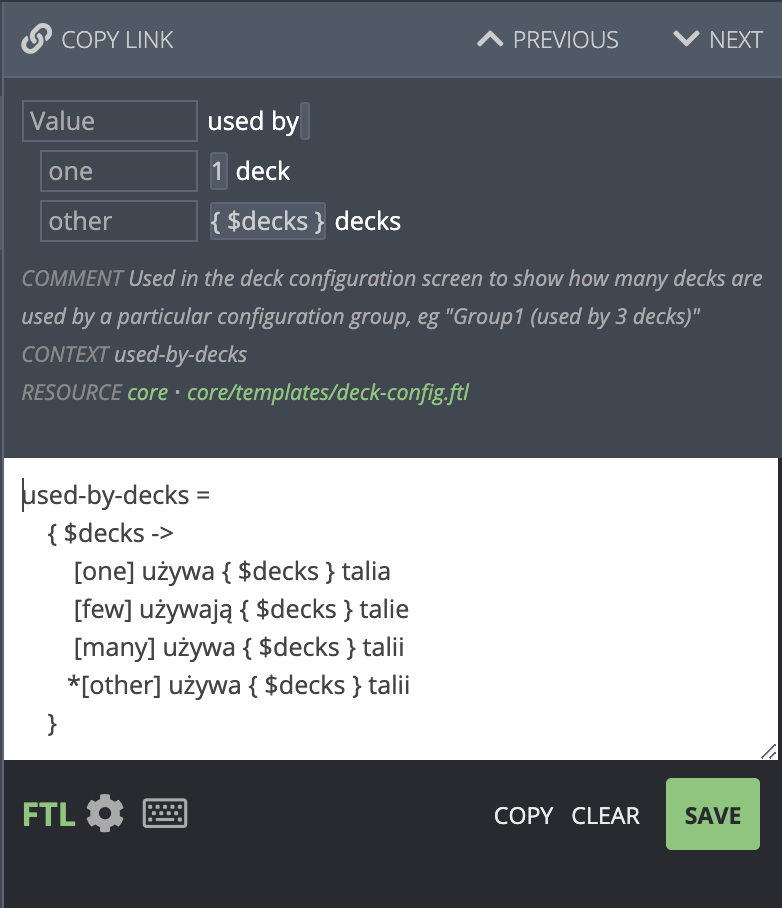 If you're not sure how something should be translated, you can click on the Locales tab on the right. You can see a summary of the translation on that screen, or click on a particular language to see how it has translated all its plural forms.

For example, the following is fine:

When you need to use a [ or . character at the start of a a line in a multi-line string, please escape it by wrapping it in {" and "} - for example:

Each time a new Anki beta is released, it will include any translation changes that were made since the last time. Please give the betas a try, so you can see how your translations appear in the app. There's a beta testing section on the support site that you can follow for beta updates.

When translating, please try to keep the translations about the same length as the original English text. If it is not possible, and you find that text is not appearing properly in a beta (such as two labels overlapping), please report the issue on the support site.

When testing the betas, if you notice that some text is not translatable, please report this on the support site so it can be fixed.

Translating the manual is trickier than translating Anki's interface.

If you're a fairly technical user, you can fork the manual's repo, and translate one or more of the manual's text files.

After translating at least one file, please get in touch.

When adding user-visible strings to Anki's codebase, extra work is required to make the strings translatable.

Please start by taking a look at the core documentation to see how strings are presented to translators. Note how translators can not see the areas of the code where a string is used, so comments are often required to help the translators understand what they are translating.

As an example, imagine we want to add the string "You have x add-ons".

We'll look for a file like ftl/qt/addons.ftl, and add one if no appropriate one exists. Then we need to add the string to the file.

Each string needs a key that uniquely identifies it. It should start with the same text as the filename, and then contain at least a few words separated by hyphens. For example, we might add the following to the file:

The text above tells Fluent to use the first string in the singular case, and use the second string in all other cases.

While an improvement, this can make it a bit hard for translators when the "you have" part needs to change depending on the number. So while more verbose, it is better to list out the alternatives in full where possible:

This leaves the most control in the hands of the translators to be able to translate the sentence with a natural structure.

Please note that the bulk of the strings in the .ftl files were imported from the older gettext system, so many of them may not demonstrate best practice. The older system also encouraged constructs like:

Please avoid constructing strings in Python like this, as it makes it hard for translators to translate, and not all languages use English spaces. The above example would be better made into a single translatable string that takes a count argument.

Finally, we should also add one or more comments for translators:

Once you've added one or more strings to the .ftl files, run Anki in the source tree as usual, which will compile the new strings, and make them accessible in Python/Typescript/Rust.

To resolve a string, you can use the following code:

If you'd like to test out the strings in the Python repl, make sure to call set_lang() first.

Note the unicode characters that were inserted. These ensure that when left-to-right and right-to-left languages are mixed, the text flows correctly. For debugging, you can strip the characters off:

A global is available with automatically generated functions in camelCaps. Eg:

The functions have docstrings that have the original text, so you can hover over them to see what the text says.

To make use of the translations, they first need to be fetched from the backend. You'll need to specify the modules you want included, eg:

The backend and collection structures have an I18n object in .tr, which can be called to get a translation, eg, in a Collection method:

The docstring contains the original translation, and your editor can show you the names of each argument.

Anki versions before 2.1.44 used a single function and a separate constant instead. Eg, instead of

This old style will still work for now, but will be removed in the future.

Sometimes you will need multiple translations that have some text shared between them. For example, the search code has a list of separate error message, such as:

Since there are a lot of separate messages with the same prefix, we can split it off into a separate string:

The code can then compose the message from two separate entries. Note that we're using a Fluent variable in the outer string, as some languages may want to place the reason first, not include a space after the colon, and so on.

Translators may not have any development experience, and HTML can be difficult to read and translate correctly. Prefer plain text where possible, and when HTML is required or would make things much clearer, consider using markdown instead (see the search translations for an example of how this is done).

Avoid Strings That Will Change

Avoid doing things like listing out a series of options in a string, if there's any chance that list will change in the future. When the string later gets updated (and assuming people don't forget to update it), it will need to be given a new ID so that translators become aware of it, and doing so will mean all the existing translations get invalidated until a translator has a chance to update them, which may take months and sometimes even years.

Please try to be conservative with the number of new strings you add, as translator time is precious, and the more strings included in Anki, the more overwhelming it can be for translators. If you need to display an error message for some obscure error that most people will never hit, it probably doesn't need a translation.

Add-ons can make use of existing strings in Anki, but if you wish to add new strings, you'll need to add them to your add-on rather than Anki. How you approach translations in your add-on(s) is up to you:

Fluent is not currently recommended for add-ons. There is limited tooling support for it, and you would need to bundle the Fluent Python libraries with your add-on.

If you have not signed up to the translation site yet, please see Getting Started.

Please start with the core module, which is documented here. Once the core module is mostly translated in your language, you can then move on to the mobile module.

When translations are nearing completion, please reach out on the support site, as new languages need to be manually added to the build process.

Once a new language has been added, your translations will be visible in subsequent beta builds and app store releases. Please give the betas a try, so you can see how your translations appear in the app. If you're not already a beta tester, please request an invite on the support site.

When translating, please try to keep the translations about the same length as the original English text. If it is not possible, and you find that text is not appearing properly in a beta (such as two labels overlapping), please report the issue on the support site.

Thank you again for your help!

AnkiDroid has its own translation site:

Work is currently underway to integrate Anki's core module and its translations into AnkiDroid, but for now, AnkiDroid only uses its own translations.